Family and a Need for Speed led Romar Dennis to Lacrosse

Romar Dennis can tell you every detail about the photograph.

Go ahead, ask him.

Johns Hopkins is playing Virginia in the 2005 NCAA Semifinals. At the center of the frame, there’s Kyle Harrison accelerating out of a split dodge. He has on a white jersey and light-blue shorts. He has athletic tape underneath his left knee. He has his defender on skates. At the top of the image there’s the word “OVERTIME” in bold blue font. “EVERYTHING ON THE LINE,” it reads below Harrison’s cleats.

“That was the desktop background on my family computer,” Dennis explains in between sips of cold brew at a hip coffee shop overlooking Baltimore’s Inner Harbor. It’s a warm evening in early April. The interior is modern and minimal apart from the complex looking pour-over equipment and espresso machine. Dennis makes the high top in the back corner he’s sitting at look more like a kids’ table.

He witnessed Harrison’s moves up close for the first time during his rookie season in 2017. That’s what I’ve been trying to do my whole life, he thought after watching Harrison shake opposing midfielders and score. “I was never a power player because I was so skinny growing up,” Dennis says “I’m a little bigger now, but I’ve always been about speed. And Kyle being one of the most dynamic midfielders ever, I wanted to model my game after his.” The 23-year-old self-described “lax rat” is on a mission to stand side by side his childhood idols. The lanky kid who grew up trying to mimic the likes of Harrison, Rabil, and Walters, now has YouTube clips dedicated to his alley dodges at Loyola University. The way Dennis plays often poses an unsolvable equation for his opponents. When you’re 6-foot-5, weigh 230 pounds, and wear size 13 cleats, you shouldn’t possess Messi-esque footwork or a split dodge that would make Allen Iverson blush and did make The Split Dodge twitter account claim in July of 2017: “Romar Dennis is not human.” 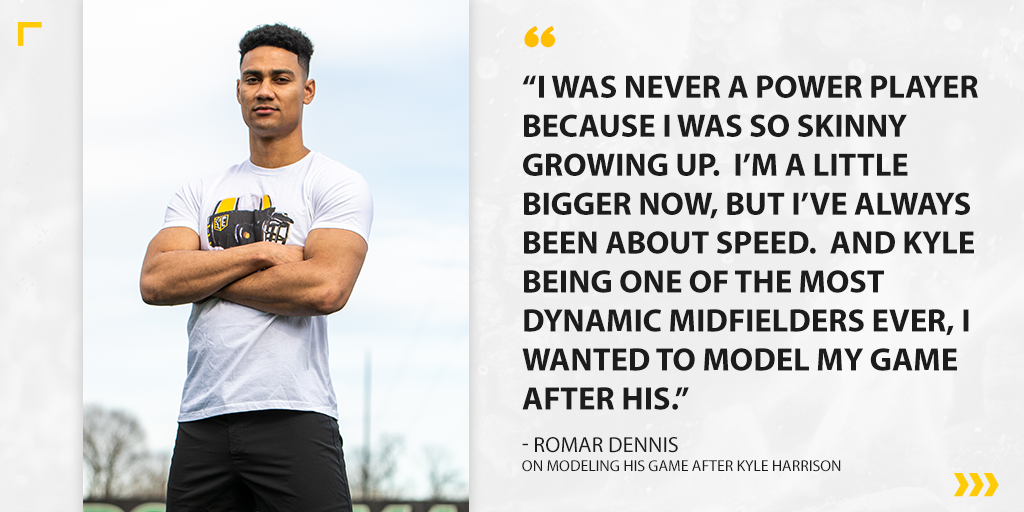 “He’s a large young man playing lacrosse like one of these speedy midfielders that can cut on a dime,” says Lenny Casalino, an institution in the Southern Maryland lacrosse scene who coached Dennis throughout his youth career for the Calvert Lacrosse Club and later Cannons Select Lacrosse. When you ask Dennis if he’s always excelled at lacrosse, though, he replies faster than his shot on the run. “Absolutely not,” he says.

“It starts with my parents,” Dennis will tell you. “I had zero lacrosse ties coming in.” Dennis’s mother, Marleny, is from El Salvador. She fled the country in the early 1980s during the Salvadoran Civil War. Dennis’s father Roberto Sr. grew up in Panama’s Bocas Del Toro province, near the country’s northeastern border with Costa Rica. He started playing baseball around the age of five. He remembers huddling around the radio with his nine siblings and listening to games. They’d fashion their gloves out of cardboard. They’d write the names of their favorite players on the back of their shirts and pretend they were playing in the “Big Time.” Roberto Sr. always imagined he was Willie Mays. When he was in high school, he caught the attention of Herb Raybourn, the Yankees scout who later signed a pitcher by the name of Mariano Rivera. Roberto Sr. played four seasons in the Yankees farm system for teams like the Alexandria Dukes and the Greensboro Hornets. 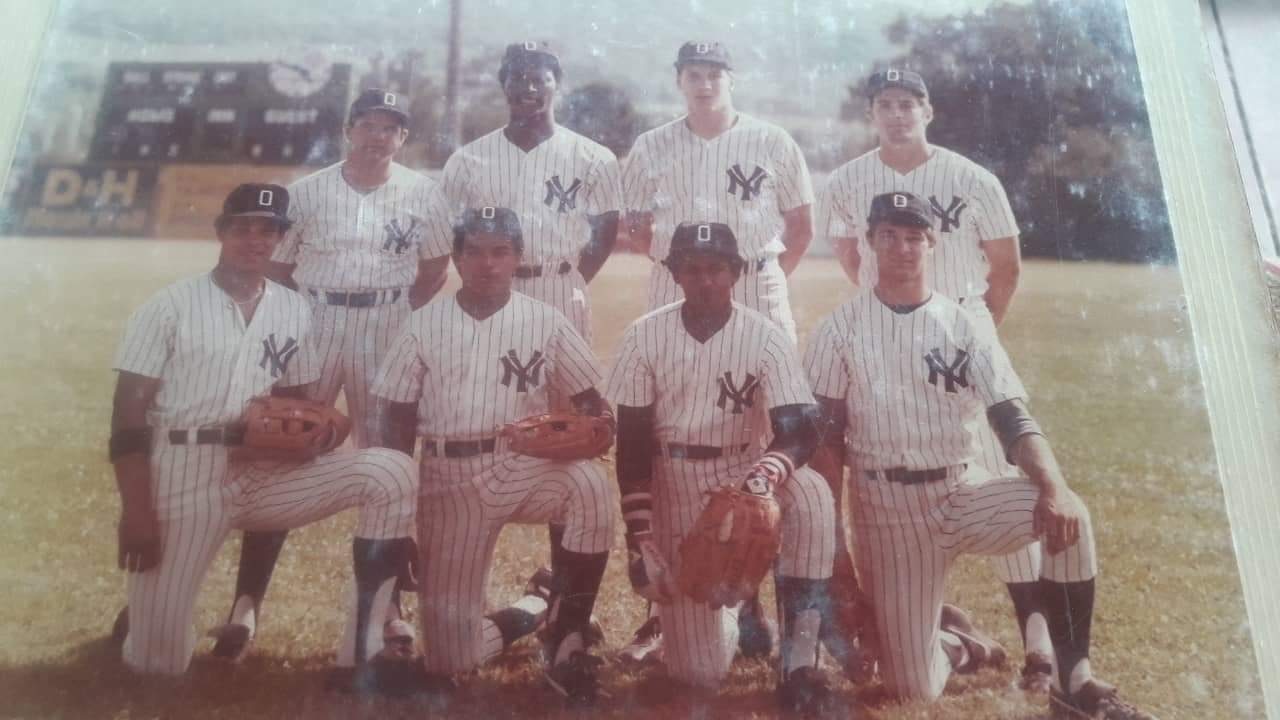 Dennis’s father, Roberto Sr., and the Oneonta Yankees. (Courtesy of the Dennis family)

“Those were the days,” Roberto Dennis Sr. says with more than a hint of nostalgia.

He says early on he tried to coax his sons to play the game that was his first passion and the game that brought him to the United States when he was 19. Romar and his older brother, Roberto Jr., didn’t share their father’s enthusiasm for America’s pastime. “I was just so bored of baseball,” Romar says. He loves watching games now, but back then remembers sitting in the infield, preoccupying himself by digging around in the dirt until a ball would inevitably go whizzing by. “I wanted to be aggressive and physical,” he says. “Lacrosse had all of that. It had speed, hitting, so I fell in love with lacrosse early on.” He started playing lacrosse competitively in the fourth grade.

That hankering for contact sometimes didn’t end well. Dennis broke his collarbone in the last game of a tournament during the summer after eighth grade. “He played like a free safety,” Roberto Sr. says. At that time he was a FOGO since he wanted to play the same position as Roberto Jr. It was also around this time that Dennis began to grow. A lot. He shot up from 5’9” to 6’2” between eighth grade and his freshman year at St. Mary's Ryken. The problem was he stayed about 140 pounds. “He was all arms and legs,” says Roberto Sr., who at 60 still looks like he could don pinstripes. Roberto Sr. never lifted weights before he played in the minors. He didn’t want his younger son to have the same disadvantage. They started with modified push ups. Then came regular pushups. Then squats, then incline bench presses with 20 pound dumbbells. Roberto Sr. would even make protein shakes with milk, bananas, ice, whey powder, and sometimes chocolate syrup.

“It’s crazy that his athletic potential was limited by his resources and he still got there,” Romar Dennis says about his father. “To have an abundance of resources and going to a division one school with this weight room, I have no excuses not to get bigger and stronger.”

Dennis says he also inherited his father's chip on his shoulder (he’s one of 10 siblings and although 6’2” still shorter than his four brothers) and his mother’s work ethic. “They instilled in us how much harder things can be than whatever we are doing,” he says of his parents. “We're in Maryland playing lacrosse. We don't have that much to complain about.” 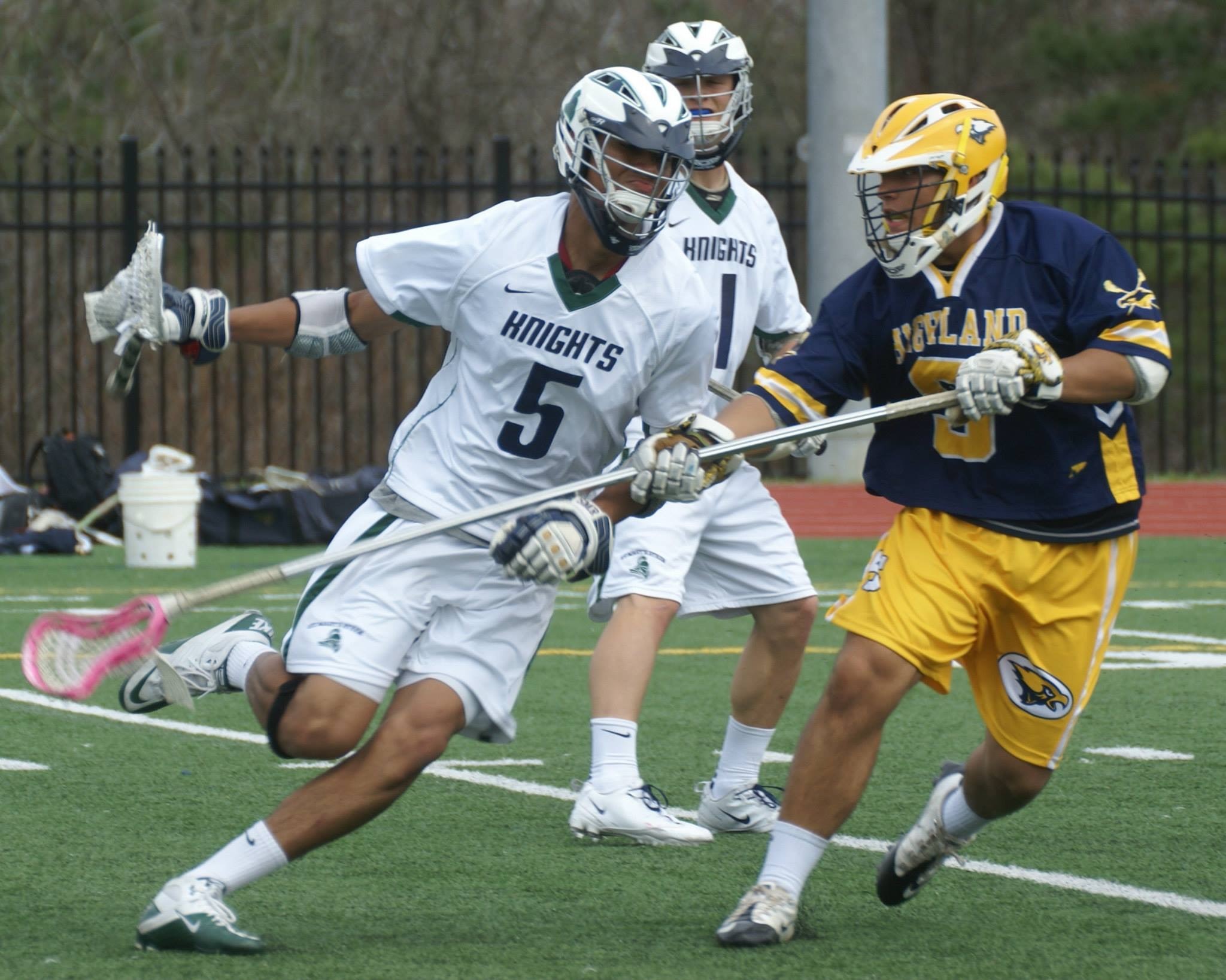 Maybe that’s why when you ask Dennis if he can do an interview at 6:15 the next day, he texts you back within one minute: “AM or PM?” You hadn’t even considered AM was an option. Maybe that’s why the other day Dennis was running hill sprints at Oregon Ridge Park when most people were still hitting the snooze button on their alarms. He wakes up at 4:45am on most weekdays to train before heading to Morgan Stanley, where he works as an analyst. In the spring he adds shooting sessions at least three days a week at Loyola’s Ridley Athletic Complex.

“He takes his craft very seriously,” says Brandon Huggins, the Strength Coach for Loyola University Men’s Lacrosse team and the Training Manager at Training House Gym in Baltimore. Huggins has worked with Dennis on and off for the last five years. He’s seen him gain 20 pounds of muscle and evolve from a collegiate standout into a rising star in the professional ranks. It’s safe to say their regimen is a little more advanced than Dennis’s workouts in the basement of his family’s house in Huntingtown, MD. A recent Sunday morning session included diaphragmatic breathing, dynamic stretching, and activation with mini bands. That was the warm up. 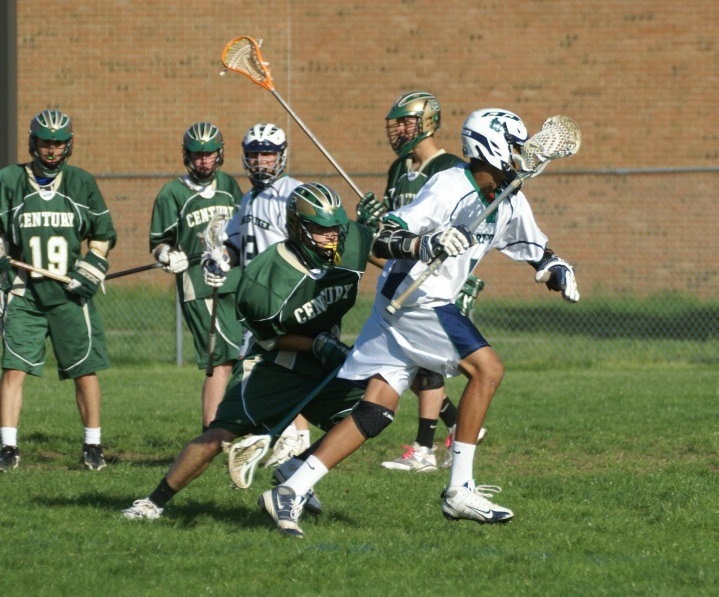 Huggins says the focus this time of year is movement efficiency and agility, to ensure Dennis peaks around the start of the season. Each workout concludes with a conditioning session that typically last 15 to 20 minutes. It could entail exercises with Dynamax medicine balls, an Airdyne bike, or sprints and change of direction work on the turf. The goal is to combine power, speed, and rotation to simulate one of Dennis’s runs on offense.

“He never settles for where he is and what he has accomplished,” Huggins says. “He’s always chasing. He's always looking for that next venture, that next accolade.”

But if you look at Dennis’ Instagram account, you won’t find any gym selfies or #goals. Instead, you’ll see Diesel—his family’s 7-year-old pit bull—is his profile picture. You might also notice a picture from the weekend of his 21st birthday. Dennis and his family celebrated the occasion in what seems like an unlikely destination: Obetz, Ohio. Dennis was busy scoring two goals, including the go-ahead tally on a two-point shot, in his third professional game. Afterwards, he took a photo with Harrison, who was on the losing side.

“Pleasure to finally meet, brotha.” Harrison commented on the post. “Keep on shakin.”

As June 1st approaches, he knows there’s more room for him grow on the field.

Read More →
At the Premier Lacrosse League, we respect your concerns about privacy and value the relationship we have with you. We use cookies to ensure that we give you the best experience on our website. By continuing to use this site, we will assume that you are happy with it.Ok