Top 10 Moments Of The Redwoods Season

10. The Comeback That Could Have Been

A four-goal run in the middle of the inaugural Championship game created a seven-goal cushion for Whipsnakes heading into the final minutes of the third quarter. After Jack Near and Ryder Garnsey narrowed the lead to five with under a minute to play in the third, a failed clear by Whipsnakes led to a transition opportunity for Redwoods. Near found Sergio Perkovic on a skip pass through the Whipsnakes’ recovering defense and Perkovic unloaded a two-point bomb that brought his team within three.

Although Redwoods would go on to lose the inaugural Championship in heart-wrenching fashion, Perkovic’s two-bomb brought new life to Redwoods and their fans heading into the fourth quarter, one that would see them go on a 5-1 run to take the lead with under two to play. The Redwoods’ comeback may go down in history as one of the greatest “what if” movements as we witnessed one of the greatest comebacks in lacrosse history fall just short.

9. Troutner Comes Up Big in the Semifinal Game

In the midst of a four-goal run that would propel Redwoods to the inaugural PLL Championship, Tim Troutner had one of the biggest saves of his young career. On a day where he would amass 14 saves and a 66 percent save percentage, Troutner proved why he earned Rookie of the Year as Connor Fields stepped down, hands free from ten yards from the left wing. Troutner read Fields as he dropped the head of his stick low but reacted quickly as Fields brought his front right shoulder up to pull the ball high. Troutner punches his left hand to the ball, launching the ball in the air for a textbook “popcorn” save.

While amassing 23 caused turnovers, ten more than anyone else in the whole league, Garrett Epple was a problem for opposing offenses all season. Like his idol Ray Lewis, Epple brings a perfect combination of anticipation, explosiveness, and tenacity that allows him to wreak havoc all over the field.

In Week 5, Redwoods found themselves down 7-4 late in the first half as Whipsnakes brought down the ball on a fast break. Epple rotates from his position on the near side post and lays a hit on James Barclay that made Dustin Keller shiver.

Following the hit, Redwoods would outscore undefeated Whipsnakes 10-4 on their way to an upset victory. 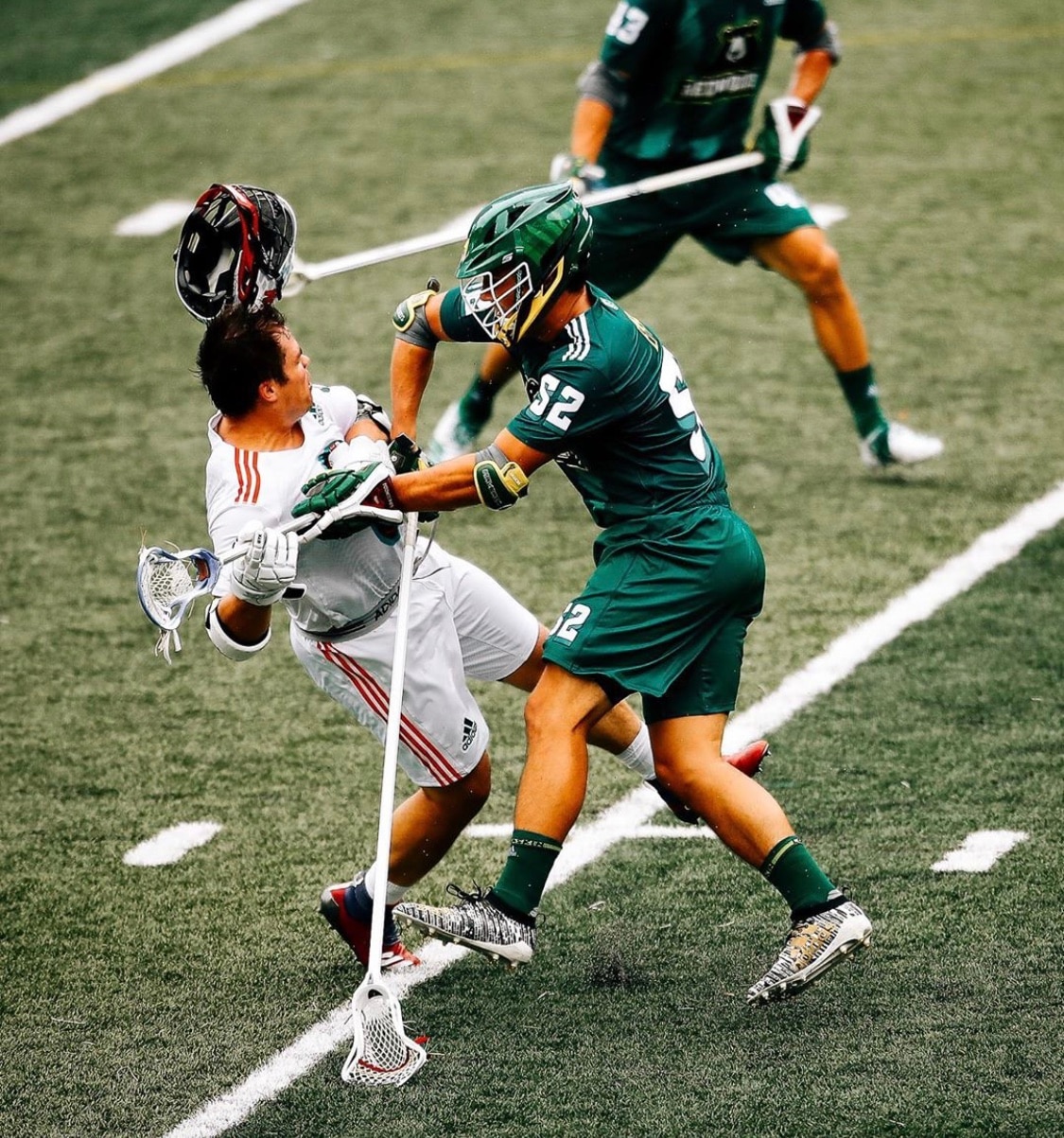 While leading the league in scoring since the All-Star break, Ryder Garnsey simply couldn’t be guarded down the stretch of the season. And he let opposing defenders know it:

As a rookie, Garnsey carried himself with unmatched confidence. Between a relentless motor and a knack for the spectacular, Garnsey’s future is nothing but bright.

The first trade in PLL history took the league by surprise as Whipsnakes dealt Jules Heningburg to Redwoods for long stick midfielder Alec Tulett and a fourth-round draft pick. Heningburg, who was averaging two points a game in the first three weeks with Whipsnakes, accompanied a Redwoods attack looking for a dodging presence from behind the goal.

In Week 4, Heningburg shined in his new role, putting up five goals and three assists while leading Redwoods to their highest offensive output of the season.

5. A Late Round Steal

Entering the 2019 draft, Head Coach Nat St. Laurent knew that goaltending would be the biggest question mark facing his Redwoods team. As Jack Kelly continued to rehab from a knee injury, Gunnar Waldt was the lone goaltender on the Redwoods roster. That changed as Coach St. Laurent used his fourth round draft pick to take Tim Troutner, the lone goaltender in the 2019 draft.

After a highly competitive Training Camp, Troutner earned the Week 1 start as Redwoods headed to Boston to take on preseason Championship favorites, Atlas. Troutner rewarded his team and coaches’ confidence by delivering a 17-save performance that would mark just the beginning of a Rookie of the Year campaign.

Without a home stadium to call their own, it was rare for teams in the PLL to feel like they had “home field advantage.” However, in Round 1 of the 2019 playoffs, as Redwoods took on Archers for a chance to advance to the semifinals, Redwoods felt the love from the fans in Columbus Ohio. Just over four hours south east of South Bend, Indiana, Fighting Irish fans and players of St. Laurent and assistant coach Dom Marzano pledged new allegiance to a new team as they filled the air of MAPFRE Stadium with chants of “Let’s Go ‘Woods!”

3. Garnsey and Kavanagh abide by rule number one. #ADAP

After a demoralizing 17-4 loss to Whipsnakes in Week 9 and wins by both Archers and Atlas in Week 10, Redwoods found themselves in an uphill battle to secure the last playoff spot. In a season where the average margin of victory was just above three goals, Redwoods would have to beat Chrome by seven or more to make their way into the Championship bracket.

When their team needed them most, Garnsey and Kavanagh stepped up and combined for nine goals, outscoring Chrome 18-7 on their way to securing a playoff spot.

The most memorable wrapped up a third quarter three-goal run that put Redwoods ahead 11-6. As time ticked down in the third, Garnsey found Kavanagh on the back post for one of the most unforgettable goals of the 2019 season.

After a first half that featured a 5-1 run from both teams, Redwoods and Chaos came out of the halftime of their semifinal game tied at six. Then Redwoods did what they have done all season: dominate the third quarter. Outscoring opponents 53-34 in the third quarter alone, Redwoods continued this trend, amassing a four-goal lead as they shut out Chaos in a third quarter run that would permanently separate themselves from Chaos and lead to a Championship berth for Redwoods. The run was capped with an exclamation point that encapsulates their inaugural season as a whole; starting with a save from Troutner and a loose ball from Epple, Garnsey finishes off a dish from Epple on a four on three fast break.

If you follow lacrosse, you know Greg Gurenlian’s story. As a player who has completely revolutionized a position, Gurenlian will go down as the best faceoff athlete to have ever played the game. However, there is more to “The Beast” than what fans see on the field.

The consummate professional, Gurenlian will stay on the field, win or lose, until every fan has a picture or an autograph. His ability to compete as hard as possible and leave everything on the field is one thing but his willingness to share his precious time off of it with every fan is what makes him… well… him.

Heading into Albany, Gurenlian connected with a fellow faceoff athlete and University at Albany student Cole Neville. As Cole battled cancer, Gurenlian visited in the hospital and asked Neville to be an honorary Captain for their pivotal Week 10 matchup versus Chrome. Neville proceeded to win the coin toss and watch as Gurenlian scored his first-ever PLL goal. Gurenlian immediately dedicated the goal to Cole and saved the ball to give to him after the game.

Gurenlian’s selflessness and gratitude to be playing the game we all love emanates through not only his team and the league, but to the fans as we continue to appreciate him and everything he has done for the game we love.

16 thoughts on “Top 10 Moments Of The Redwoods Season”