One of the many things that separated the PLL from other leagues was the implementation of new rules such as the 52 second shot clock and a shorter field. As the inaugural season kicked off, many wondered how the new league with new rules would look and how it would affect the outcomes and stats of each game.

Now with the inaugural season in the books and the Whipsnakes being crowned the Champions, here is a breakdown of the 2019 season by the numbers. We added charts and graphs to visualize the data.

Number of Players Who Scored: 105 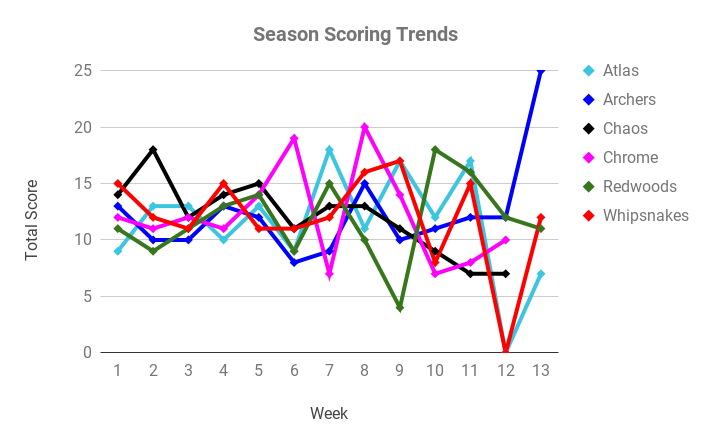 A couple interesting trends to point out. Chaos was the hottest team in the league at one point. They started to cool off after Week 8 and were trending down heading into the playoffs, ultimately leading to their demise. The Atlas never seemed to find their groove all season long. They were literally a roller coaster when it came to scoring. 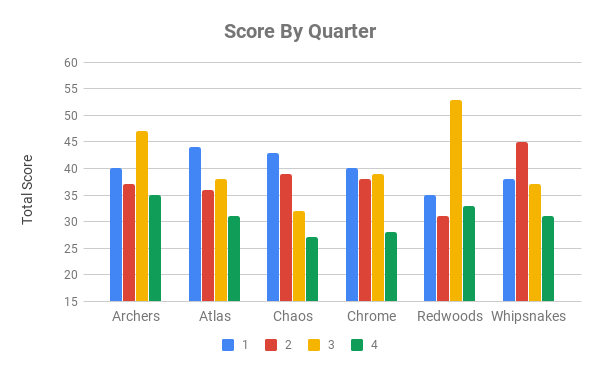 Notice the trends. The bottom three teams (Chrome, Atlas, Chaos) were the lowest-scoring teams in the second half. It is no coincidence they finished in the bottom half of the league.

A lot of people say the 3rd quarter is the most important quarter in lacrosse. Redwoods absolutely owned the quarter coming out of the half. A strong third can extend your lead or help you crawl back into a game.

The most common statement from coaches, “It is a four-quarter game.” The PLL champion Whipsnakes were pretty consistent throughout the game.